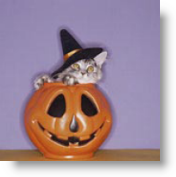 “When thou art come into the land which the Lord thy God giveth thee, though shalt not learn to do after the abomination of those nations,” (Deut. 18-9).

Halloween or ALL HALLOWS’ EVE, was originally a festival of fire for the dead and the powers of darkness and occured on the evening of 31 October. In addition, the night before the Christian festival of Hallows’ or ALL SAINTS DAY commemorates the saints and martyrs, and was first introduced in the 7th century. The date was changed from May 13 to November 1 in the following century, allegedly to coincide with and Christianize as a pagan festival of the dead. All Souls’ Day in the Roman Catholic calendar is November 2 and is marked by prayers for the souls of the dead.

Before the coming of Christianity, the pagan Celts in northern Europe held two great fire festivals each year. Beltane on the eve of May 1 and Samhain on the eve of November 1 which was to mark the beginning of summer and winter. These dates have no connection with the equinoxes or solstices, or with sowing and reaping, but seem to date from very early times when Celtic society depended heavily on cattle for subsistence. Samhain marked the beginning of winter and was the time when the cattle were brought in from pasture to spend the winter under cover in addition to being the beginning of a new year. Because the Celtic day started at sunset, and ran to the following sunset, the festival began on the eve of November 1.

Bonfires on high hills were a blatant feature of The Old Halloween rites, though in England they have been gradually transferred to November 5 to mark the arrest of Guy Fawkes. In the 1860’s a traveler in Scotland counted 30 fires on the hilltops between Dunkeld and Aberfeldy, each with a circle of people dancing around. Done to the end of the 19th century, fires blazed on the hills in Lancashire on the eve of All Hallows. In north Wales every family built a bond fire and each person threw into the ashes a white stone which he had previously marked. Prayers were said round the fire and next morning if a stone was missing, the people believed that its owner would die before he saw another Halloween. The same belief existed in the Scottish Highlands and many forms of fortune telling were a traditional feature of Halloween – probably because it was the Celtic New Year’s Day and so a suitable time for predicting the events of the coming years.

In Aberdeenshire and Buchan in the 19th century, boys collecting fuel for the bonfire would ask for ‘peat’ to burn the witches. When the fire was lit, the boys danced around the fire shouting “Fire! Fire! Burn the witches.” When the fire died down, the ashes were scattered and when the last spark had gone out, the cry went up into the ominous darkness. “The devil takes the hindmost” and they all ran for their lives. In Wales ‘the cropped black sow’ would take the hindmost.

All Hallows’ Eve was a night when the dead stalked the countryside, and offerings of food and drink were put out for the ghosts and they passed by to the west always, the direction of the dying sun at sunset.